As the AGM was cancelled, I kicked the can down the road a bit, but finally last Monday evening I presented the slides to my local club (SEARG). Given it was originally supposed to be a presentation to a national audience, the slides are now available from here.

So, several months later, house move complete and it is time to get a shack operational again.

I am a fan of keeping things running when the power goes out. From a Amateur Radio Communications perspective, I have had a 80Ah battery in the shack for over 10 years and I have been using a West Mountain Radio Super PWRgate PG40S and Rigrunner 4010S to power my radio equipment and to keep the battery charged. My current ‘desktop’ is based on a Intel NUC 7i7BNH these along with their LCD’s are running off an older APC Smart UPS 1500, which gives between one and two hours of run-time should the power go out.

While everything was in boxes, I purchased a West Mountain Radio EPIC PWRgate (I wonder what adjective will be used to describe the 4th Generation!) this device can charge Lead Acid, AGM/GEL and LiFePO4 Lithium battery types, and, what attracted me to it is that it has a built in Photovoltaic (PV) Charge Controller. Which removes the need for a dedicated Charge Controller.

Sometime during the move, the old AGM battery died (Ophelia was its final ‘performance’). New shack, new battery, a Trojan EverExceed ST-1280 was ordered from O’Connell Batteries in Cork and duly arrived.

Plug-and-play? well not-exactly. After looking at the specs, the default ‘AGM’ setting in the Epic PWRgate needed some adjusting to avoid overcharging the battery. The battery specifications say 2.35 Volts per cell (for 12 hours), so the ‘Max charge voltage’ needed to be dropped from 14.4 to 14.1 volts, and the PSU set to 14.2. On Linux, the Epic PWRgate appears as /dev/ttyACM0, guessing I used 115200, N81, no handshaking and its console immediately popped up.

Once out of setup mode, it spits out readings about once per second. This includes what the state of the chargers is, the power supply voltage (PS), Battery voltage and charging current (Bat), Solar Panel voltage (Sol), Number of minutes in this charging state (Min)

Hopefully the battery is as reliable and lasts as long as the last one!

Nice overview of the Motorola DM-4600 by Steve EI5DD here. I also have a DM-4600 and it is a very nice Transceiver and I do like my one.

I wonder if anyone knows if Motorola have any intention of supporting the Talker Alias function, which has been part of the ETSI spec (see page 52) since 2016?

So there I was early Saturday afternoon wondering what to do with myself before the England-Italy match kicked off. The CQ WPX RTTY contest was on, so I sat down in the shack, installed Fldigi, and configured it to work with my K3. I have a 15m Inverted V Dipole up which is my best antenna, so I operated in Search and Pounce (S&P) for a bit and was working away nicely with no real issues other than the operator hitting the wrong keys on the keyboard.

Last time I operated a RTTY contest from home like this I was using a Kenwood TS-2000X, I was very very disappointed with the radio at the time, so much so that I sold it pretty quickly afterwards. It appeared to suffer badly with strong signals capturing the automatic gain control (AGC) and completely blocking out out the weaker stations. The K3 was having no such issues (thankfully). 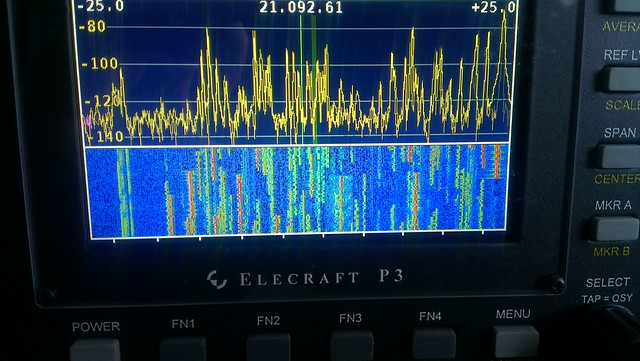 This left me with a quandary. What do do about the Rugby? Well, my Intel Nuc has a Mini DP connector so I borrowed the screen from my Mac Mini, opened up RTE Live  on it and voila!

I took a break from the contest for the Ireland-France game and resumed afterwards, finishing up with about 130 contacts (QSOs) in the log by Saturday evening.

I did not feel well Sunday morning, so I gave myself the modest goal of 200 QSOs. After a break to watch Scotland get robbed of a win against Wales, I ran for a bit, then hit 250 Q’s, returned to S&P again then 300, finally deciding that I had enough done at 329.

That said, I really really missed having a bandmap. A band map is a display of recent DX spots by frequency. You can see one in the middle of the picture below. This display is user-configurable in many ways including the length of time to display, the frequencies to include,  etc. It lets you see at a glance what activity is on the selected band and, if you see a station you really really really want to get into your log. You can pounce with a click of the mouse.

Last year after listening to the LHS guys interview Petr, OK2CQR, I was convinced to give CQRLOG a go. I have gotten so used to its bandmap that really missed it.

After the contest I was chatting to G0HWW on IRC about my issue and he pointed me at an old blog post of his (thanks Darren), initial testing seems promising but rigctld seems to exit with errors now and again. More work is needed I think.

Sunday afternoon, in the melee, I was running and a callsign appeared on my screen that seemed familiar, N9TGR. I responded with my normal report and was trying to figure out how I knew the callsign. I saw the other stations report appear on the screen and at the end of it was “UP THE DUBS”.  The penny dropped.  In 2009 I travelled to Chicago to present at the ARRL and TAPR Digital Communications Conference, somehow Andy Ronan, N9TGR (a dub, and no relation that we know of and also EI6KG), got wind I was going to be there and suggested that I call out for dinner with him and his family one of the evenings while I was there.  I also remember joking it would be highly unlikely that we would ever meet up on air! Suffice it to say I spent a most enjoyable evening with Andy and his family, they showed great hospitality,  great memories!

I finally got around to trying CQRLOG this weekend. I say finally because I knew it existed, but somehow it kept slipping my mind. On a long drive home on Thursday evening I listened to LHS Episode #128 where the author Petr – OK2CQR was interviewed so it was a good reminder.

My motivation was to get more functionality from my logging program, especially since I am making more time to operate, and, I am more actively chasing new DXCCs.

During the interview, Petr mentioned his other project HamQTH.com, a service that I use regularly enough. He mentioned that he would like to see more pictures, so I obliged by uploading a picture of my QSL card. I don’t have a decent picture of my shack at the moment. It is a bit of a mess.

Anyway, if you are a looking for another reason to ‘jump ship’ from  Windows to Linux on your shack computer, this is definitely a good one.