In a conversation  late last year (at the TAPR DCC)  I was asked what is the actual level of APRS activity in Ireland.  Thinking about the answer for a while, I realised that I really didn’t know, and that got me wondering how to go about visualising it.

I quickly came across  Leaflet.heat, a Leaflet plugin plugin for generating heatmaps, so I  bodged together some python to grab packets of moving stations from the APRS-IS backbone and put them into a format Leaflet.heat can read.  After gathering about 6000 data points, here is what it looks like: 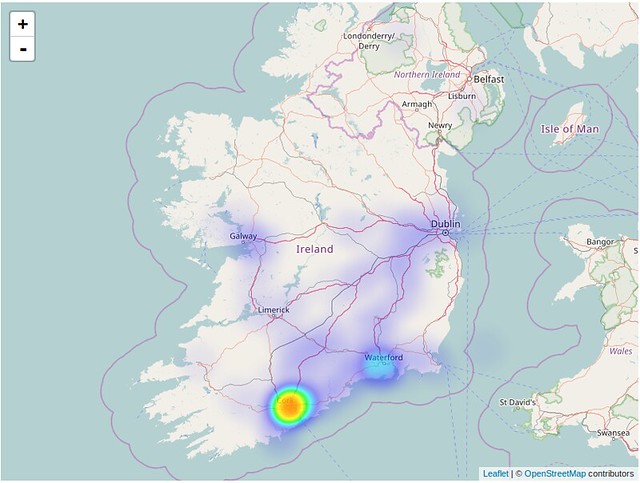 So, there you go, it is fairly conclusive that Cork city has the most ‘on-air’ APRS activity. This is followed by Waterford area, Galway area and then the main motorways. Pretty much what it says. Last Wednesday Xastir got OpenStreetMap support in CVS courtesy of Jerry Dunmire, KA6HLD. Even though Jerry says its early days yet, it is “good enough” for me already. Way to go Jerry!

I’ve mentioned before the GAISS project (here and here). It wasn’t in the original plan, but we are now receiving the MAP27 information from the ‘base’ radio, and making them available for a small conversion appplication that re-transmits them on the National APRS frequency of 144.800Mhz. This allows us to leverage the already existing APRS infrastructure in place to get our ‘position packets’ to go around corners where there is no existing RF path.

Our GAISS GUI will then be able to pluck the relevant data from the APRS data stream and plot the positions of the SEMRA personnel that are out walking for the event. Delighted as we are to have this much working (and that we will have something to show at the Galtee Walking Festival), we are still a long way of a ‘finished’ prototype.

Parallels is very very impressive. I’ve been using it since before christmas to boot custom Ubuntu CD’s for the Enable project here in work (on my MacBook Pro). I recently wanted to try out Radio Mobile for Radio System performance analysis. So the guys in work supplied me with a copy Windows XP and off I went.

It was a pretty simple install, then, once it was up and running, I installed the Parallels Tools as instructed, and then Radio Mobile itself. The virtual machine takes about 25 seconds to boot and less than 20 to shut down and, in operation, its very responsive. To quote Ronseal, It “Does exactly what it says on the tin”.

As part of the requirements gathering process for the GAISS Project (Geograpically Aware Information Support System), which is an Enterprise Ireland funded, proof of concept phase project. Kristian and I spent last weekend as observers (mostly as observers, though the argo pictured below did get (ab)used for a short time) on an excercise run by the South East Mountain Rescue Association. This was to allow us to see both in practice and, later on Saturday, on paper, how their processes operate. To that end, we learned lots, and were completely exhausted by the end of the day.

Remarkably, all SEMRA personnel are volunteers, and give up much of their time in order to hone their search skills in order that you and I have some hope of survival if we get lost or injured on the mountains in the South East of Ireland. What is more remarkable still is how well organised and efficiently they operate given that they are so few in number and are all voluntary.

Update from Scott himself: http://n1vg.net/balloon

Scott, N1VG will be conducting his own High Altitude Balloon Experiment this weekend, if you look at the link at the bottom of the page, you’ll see that it will be possible to track the position of the balloon in near real time using a Google Earth.

So says Pat, N0HR. I must say, I like his analogies. Its a pity I hadn’t read this yesterday, when I would have been more prepared for questions.

Earlier today I had my own personal ‘driver’. I was operating as a ‘lead’ car in the AOL Sponsored cycling race sponsored by the Comeragh Cycling club. I managed to explain the basics of what we were doing to him (Base, 4 Cars, and at least 3 portable stations at strategic points). And I think he appreciated how useful it was to know where everyone was, but what blew his socks off was when the penny dropped as to what information APRS was providing to the guys back at base.

Hmmm, I wonder what fishing analogy could be used for APRS?

I’ve been testing two prototype Opentrackers from Scott N1VG for a while. I received cases for them the other day (seen below on top of my 2m Yaesu FT-1500M) so it is now destined for the shack of Tommy, EI2IT. Hopefully it will cover a black spot around Cahir/Clonmel for members the Tipperary Amateur Radio Group. A predicted coverage map (generated with Splat is shown below.